Books and a Bite

So you’ve just been to Saint Agnes and checked out something unexpected, like Garrison Keillor’s  77 Love Sonnets--a collection of mostly deeply romantic--and occasionally quite erotic--poems, or a  provocative novel like Meg Wollitzer’s, The Uncoupling (a novel set in modern-day suburbia with  echoes of Lysistrata). Or maybe you’ve attended story hour with your favorite three year old…where should you go for a snack? For younger bibliophiles, check out Insomnia Cookies at 405 Amsterdam Avenue, where a delicious and massive chocolate chip cookie will set you back a dollar and a quarter.  Add $2.25 for a bottle of cold milk to wash it down. Or go for their decadent ice cream sandwiches ($4.00). Pick any two cookies and an ice cream flavor (choices include chocolate, vanilla, strawberry, and moose tracks) and your server will make if for you on the spot. 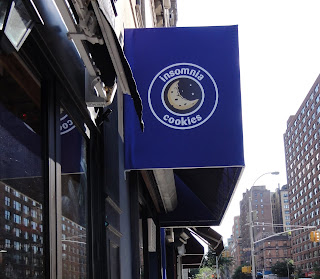 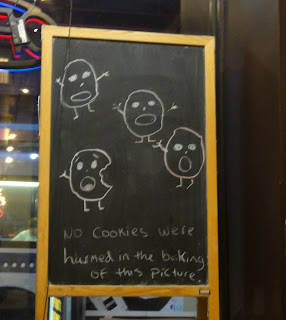 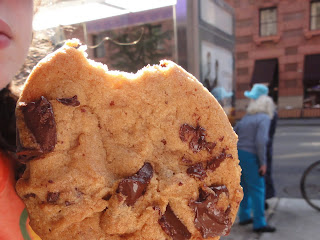 But sadly, this one was....
If your taste runs to the healthier alternative consider the peacefood cafe  (460 Amsterdam Ave at 82),   a vegan restaurant, where you can flip through the pages of your latest book while enjoying a quinoa-raspberry muffin (or any one of a number of gluten-free delights), and a cup of coffee--soy milk only.   The café also has a full menu of vegan entrees. 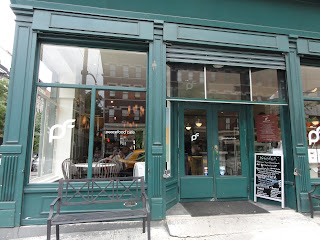 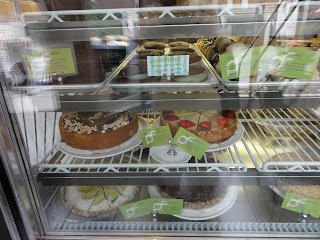 .... and a sampling of gluten-free goodies
Finally, if you’re need something stronger to accompany your reading—perhaps you’ve just checked out Finnegan’s Wake--stop in at The Dead Poet at 450 Amsterdam  – just a few doors north of St. Agnes,   where you can combine literature and libation. 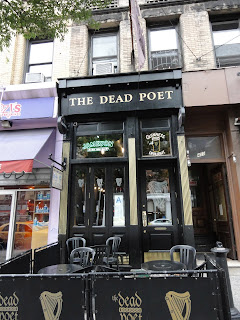 Owned by a former English teacher, The Dead Poet features a range of cocktails named for authors and poets including Walt Whitman, Mark Twain, Oscar Wilde, Elizabeth Barrett Browning. I tried the Emily Dickinson, a pink lemonade drink that combines Bacardi limon, triple sec, sour mix, and a splash of grenadine.  If you need something to snack on, the Dead Poet serves a selection of bar food, cooked at the bar’s sister site up the street, George Keeley, and delivered by one of  the good natured bartenders. 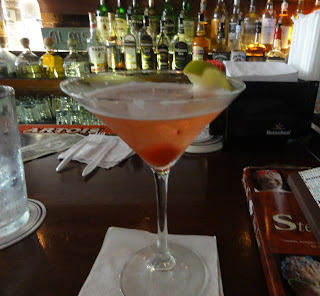 The day I visited The Dead Poet I brought my own reading matter, The Liar by Stephen Fry of Jeeves and Wooster fame. But if you’ve forgotten to bring a book, you’ll find framed quotes on the walls, as well as on the LCD that alternate displays the bar’s beer menus and more literary quotes--one of my favorites was Gwendolyn Brooks' “Poetry is Life Distilled.”  Better still, the Dead Poet has its own lending library, just ask the bartender where to find it. 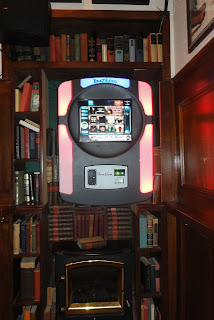 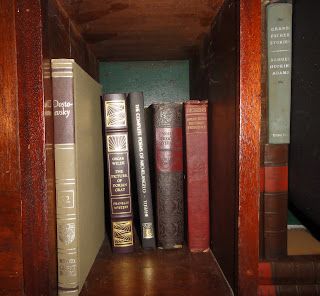 Part of the small but choice collection!

* perhaps not exactly what she had in mind, but recommended nonetheless.
Posted by juna at 1:33 AM