If you’re spending time in tonier Stone Harbor, plan a visit to Barrier Island Books on 301 95th street (open 10 am until 10 pm during the summer.) Owner Rita M. Seaman keeps this inviting little store well-stocked with what her customers want: mysteries, romances, popular fiction. There’s also a fine section on military history, books on religion and general history, and a sweet children’s corner. Some original Nancy Drew mysteries made there way into the inventory not too long ago—culled from private sales, the collection from a school that closed, and local library sales—but were quickly snapped up.  A wicker chair sits outside on sunny days so customers can spend some time reading in the fresh air or waiting for their companions to finish shopping. 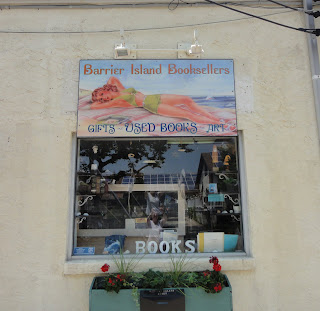 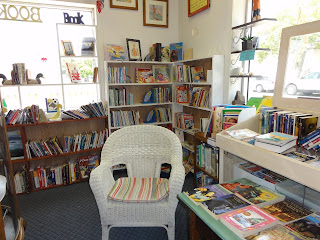 Among the other books I picked up during my visit was a copy of Reader’s Digest Condensed Volume 2 - 1962.  Readers of a certain age may remember these volumes on the shelves of older relatives. I first discovered the series in my grandparents' elegantly furnished apartment in Chicago, a household also linked in memory with Starlight Peppermints, Hershey chocolate bars with almonds, my grandfather’s strong and principled opinions and my sweet grandmother’s warm embrace. While the condensed novels may leave you feeling a bit cheated—what’s been left out?—I can’t help feeling fond of these volumes.   The one I picked up at Barrier Island had this pretty seashore themed cover and includes a novel based on a true story, Captain Newman by Leo Rosten.* 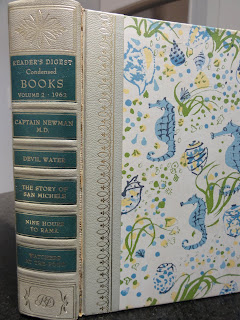 A Reader's Digest volume that seems destined to be read at the shore. 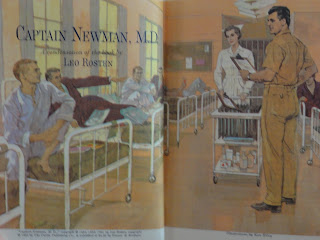 The wise and good-humored Captain Newman
addresses the patients on Ward  7.

Captain Josiah J. Newman was one of the first psychiatrists to develop theories on what we now call post-traumatic stress disorder--the previous generation's shell shock--and its effect on the lives of the World War II soldiers who were his patients. He was also known for his unorthodox treatment methods, which, in Rosten's account, included encouraging a soldier who might today be diagnosed with Tourette Syndrome, to swear at him twice a day to relieve the unbearable tension of trying to suppress his impulses. The addition of color illustrations to the text--somewhat like the Nancy Drew mysteries I read in the 1960s--adds to the nostalgic pleasure of reading a book I associate with childhood.  Captain Newman was later turned into a film (1963) with an all-star cast that included Gregory Peck, Tony Curtis, Angie Dickinson, Eddie Albert, Bobby Darin and Robert Duvall. Though I haven’t seen the film yet, film critic Leonard Maltin describes it as a “Provocative well-acted comedy-drama ..[about] battling bureaucracy and the macho military mentality on a state side airbase during WW2.”

Books and a Bite
Barrier Island Books is located in the heart of Stone Harbor, kitty corner from the always-busy  Springer’s Ice Cream, and a number of other places to eat and drink. But if you’re looking for a place to linger with your new (used) copy of The 7 Habits of Highly Effective People by Stephen R. Covey, go two blocks south on Third Avenue, take a left and you’ll find Coffee Talk. With an interior worthy of a twenty-something sit-com, comfy couches and chairs are arranged in cozy groupings.  You can order coffee, buy a sandwich or pastry and while the time away. And if anyone in your party has forgotten a book Coffee Talk has its own mini-library against one wall where you’ll find more romance novels than you could read all summer, some old volumes of Encyclopedia Britannica and a crafts book or two to inspire your next rainy day project.

* Rosten may be best remembered for The Joy of Yiddish and the Education of H*Y*M*A*N K*A*P*L*A*N*, an account of teaching English to immigrants in New York City in the 1950s.