A second visit to Atlantic Books revealed a cheerier side to the store in the person of its friendly, if harried, manager. A table was set up for the visiting author across the boardwalk from the freckle contest that was being held in front of Ocean City music pier. It was family night and a local radio station was set up at a booth a short distance away, giving out prizes. A band down the way played Beatles songs and a sardonic stilt walker dressed entirely in purple greeted children and made age-old jokes with them about being married, provoking laughter among some of the adults and embarassment or confusion among the children. 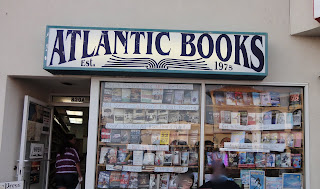 Atlantic Books in Ocean City, NJ
A banner in the store window read “Beach reading doesn’t have to be dumb” and indeed you can buy Hitch-22, the lively and provocative memoir by Christopher Hitchens, or  The Particular Sadness of Lemon Cake by Aimee Bender, an author noted for her use of  magical realism. A selection of local histories with sepia-colored covers from Arcadia publishing including one on the ubiquitous (in New Jersey) WaWa chain and the Campbell’s soup factory sit near the cashier’s counter.  In addition to the expected mysteries, thrillers and romances, all in paperback, the store has a lot of older titles as well, perhaps those that didn’t sell well on first release, but might still catch the eye of a vacationer. A large teen section is an encouraging sign although many of the titles seem to be about mean girls, supernatural creatures or both. 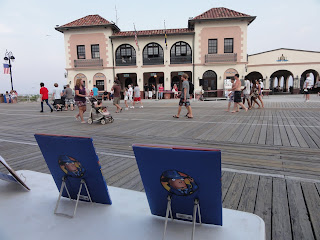 The view from the author's table opposite the music pier.

Back on the boardwalk, between the freckle contest and the ferris wheel, Mr. Stacked is signing copies of Detective Blue. It may be as close to a Norman Rockwell scene as you can get in 2011: large families stroll by, eating ice cream and fried dough, the crowd files into the auditorium at the music pier for a performance of Les Miserables played by local children, a young schoolteacher about to start her first year with a group of fourth graders stops by the book signing table as do a varied group of vacationers with and without children. The evening ends with a cool and refreshing rain, but the timing is perfect. The last book has been signed and the revelers move on to other pleasures of the summer night.

If you're staying in Avalon, about half an hour south of Ocean City,  your best bet for reading matter  is The Paper Peddlar at 2538 Dune Drive or the Avalon Public Library. The Paper Peddlar has a modest selection of books, mostly paperbacks and also sells t-shirts, playing cards, and other vacation paraphernalia.

Finally, if you’ve got an environmentalist, birder, or all-around animal-lover in your party, you’ll want to stop at the Wetlands Institute in Stone Harbor, NJ. Besides offering the chance to learn about wildlife in the salt marshes, you can get up close and personal with a terrapin, and view a nesting osprey family. The Tidepool Museum Shop has a nice array of bird guides, as well as books on the wetlands, conservation, and the environment for adults and children. The store is acclaimed as  “the best naturalist’s bookstore on the East Coast” on the Institute's web site.  Nature-themed prints, jewelry and other gifts are also on sale.