A Rare View of the Supreme Court Library

If, when in Washington,  you attend a session of the U.S. Supreme Court (hearings are open to the public), you might see one of the Justices sending an aide to get relevant material from the Library upstairs. It was not always this convenient, as my LL (law librarian) friend and I learned on a recent tour.

In the first years (the Jay and early Marshall courts), the Justices had to use their own books or borrow from colleagues until, in 1812, they were given access to the U.S. Congress collection. Twenty years later, an Act of Congress created a Law Library for both Congress and the Court, with the Chief Justice able to suggest acquisitions.

Fast forward 100 years to 1932 when the eminent architect Cass Gilbert was commissioned to design a new Court Building with its own library. Although the Depression argued against lavish expenditure, the resourceful Gilbert managed to design and oversee construction of a building that is now one of D.C.’s prime attractions.


The Library itself features a handsome oak-paneled Reading Room with a painted ceiling and, at the entry, carved profiles of Greek and Roman law-givers – Justinian, Solon, Modestinus and Draco (we had to look them up). A barrel-vaulted Special Library room, designed to hold rare volumes, now houses the Technical Services Division charged with microfilming and digitalizing materials. Another room holds bound copies of every case ever heard by the Court.
Among the Library’s many decorative elements are carved 16th century printers’ marks and five sculpted figures symbolizing Science, Law and Industry (these are male) and Arts and Knowledge (female). While pondering that, we were given a glimpse of the building’s  beautiful twin marble winding staircases and, on the top floor, what is whimsically called “the highest court in the land” – a basketball court for the staff.

Our impressive journey ended with the thought that this unique library is there to enable our third branch of government to better fulfill the promise inscribed on the building’s facade, “Equal Justice Under Law”.

Note: The U.S. Congress, with its own vast library of over 3,000,000 volumes, covers foreign as well as U.S. jurisdictions, and is open to the public. Further note: when you visit the Supreme Court building, take time to look into the bookshop; gavel pencils are a favorite. 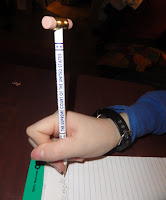