While on vacation in a warm and sunny part of the world, I've been reading this….

....in the company of this visitor. 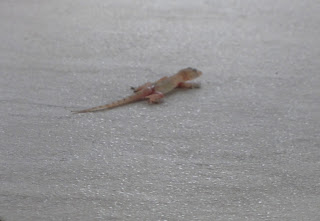 I picked up Lizard (the book) at the New York City outpost of Kinokuniya, the Japanese bookstore on Sixth Avenue, across from Bryant Park.  Yoshimoto’s work is compelling; these simply written stories with haunting subjects, such as the desirability of forgetting, linger in the mind of this reader.

More to come soon on this inviting bookstore, but in the meantime, a very Happy New Year to the readers of Stacked-NYC, or as I learned to say while visiting the store:

On Thursday, Dec. 8, the "I Love a Librarian" awards were presented to the ten national winners before an admiring audience of bibliophiles at the Times Center in Manhattan. (I blogged briefly about the contest here.)

Chosen from over 1700 recommendations, the winners ranged from high school and community college librarians to specialists in business skills and learning disabilities. Each of the gracious acceptance speeches acknowledged the essential support of colleagues and family.

Guest speaker Caroline Kennedy praised the contribution of librarians to the public school reading programs she actively supports while Vartan Gregorian, the affable and scholarly former NY Public Library president and now head of the Carnegie Corporation of New York, quoted Andrew Carnegie's reference to libraries as "bridges to the past" and "instruments of civilization".

As a reminder of Carnegie's benefactions, photos of many of the original libraries he funded were shown on a giant screen, including several in New York, New Jersey and Connecticut as well as Ohio, South Carolina and California.

In these tenuous times for public funding, it was heartening to learn that 77 million Americans now own a card offering all the transforming gifts of a public library.
Posted by juna at 2:00 PM No comments:

What to Serve with Risotto?

This question suddenly became very important today as I procrastinated on the completion of several writing projects. The easiest answers would come from a Google search, but I thought a quick check of the bookshelves was also worth a try.  Which led, of course, to more delay, as I renewed acquaintance with an old favorite: The Settlement Cook Book. 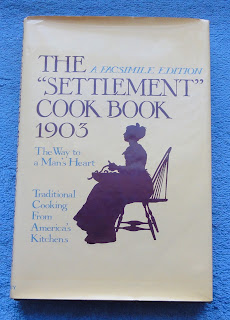 This classic cookbook by Mrs. Simon Kander (nee Lizzie Black)—with the now politically incorrect subtitle--“The Way to a Man’s Heart” has been around since 1901. The copy on my shelf is a 1987 facsimile edition, but in my mother’s kitchen, there is a battered edition that probably dates back to the 1940s or 1950s, held together with tape and bearing the stains of much use. I remember looking through it as a little girl, fascinated by the recipes for such treats as Oysters A La Poulette--basically 30 oysters, eggs and cream--or Frog Legs a la Newburg. Mrs. Kander notes that “Frog legs are nice dipped in egg and cracker crumbs and fried a golden brown in hot fat.”  She also tells how to prepare lemonade for 150 people—you’ll need five dozen lemons and six pounds of sugar—and how to make rhubarb water, a recipe curiously devoid of proportions for the main ingredients: rhubarb, sugar and water.

The book provides lots of guidance in sections such as “General Rules for Custard”—It curdles if cooked a minute too long—and contains not one but two recipes for cucumber jelly. As I recall, my mother’s edition included instructions on how to skin and prepare a squirrel.

As I started leafing through the book again today I thought at first that Mrs. Kander was the anti-Martha Stewart.  Our family copy of the book had a photo of Mrs. Kander (somewhat younger than the one below), hair neatly--if unglamorously--coiffed looking benign and reassuring, as if to say “You’ll do fine. Just follow the rules and stick to the basics.”

But Mrs. Kander did care about presentation and did not limit herself to recipes. Readers are also instructed how to set a table, wash dishes, build a fire, and dust a room. Historian Angela Fritz describes Mrs. Kander as one who “taught the art of preparing food that was acceptable to the eye as well as the palate.”

The cookbook originated at The Settlement House in Milwaukee at the turn of the last century, where new immigrants (many of whom were German-Jews) learned skills intended to help ease their adjustment to life in the United States. Mrs. Kander served as President and chief fundraiser of the Settlement House. She devised the idea of the cookbook to both help immigrants use at home what they had learned in cooking class and to raise funds for the organization. Advertisements in the back of the book paid for its publication. The first edition sold out within a year and by the end of 1901 a profit of $500 had been realized.

You can learn more about Mrs. Kander (who was also a social reformer, despite her traditional views of a woman's role in the home) and The Settlement Cookbook in this article by Ms. Fritz.  A digital version of the cookbook is available here.

End note: Regarding the risotto, although I will not clean and bone the fish myself as Mrs. Kander instructs, I’ve decided on salmon.
Posted by juna at 3:08 PM 5 comments:

Take Your Child to a Bookstore Day

Or take your inner child.  Independent bookstores in more than 45 states are participating in this event created by writer Jenny Milchman to "expose future generations to the unique pleasures [bookstores] offer”.

* You may wish to call for more information in advance, as not all store websites include information about this celebration.
Posted by juna at 12:17 AM 2 comments: