Recently I blogged about Herman Wouk’s Don’t Stop the Carnival and commented that some of the language in the book would now be considered offensive.  But after finishing the novel I thought it important to say that Don’t Stop the Carnival, published in 1965, was actually ahead of its time. Wouk not only included an inter-racial love story between the African-Caribbean governor of his fictional West Indian island and a Caucasian-American actress, but found fault with white characters who could not accept their romance (This was also a case of adultery—the governor was married—but this seems to be of little consequence by those who are shocked by the relationship.) Moreover, it turns out to be the white woman who is a liability to the career of her lover, rather than what one might have anticipated, given the times. 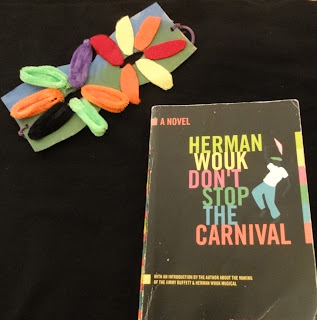 Wouk was also prescient. One character, commenting about the lovers’ predicament says “I mean, really, it’s almost a tragedy, don’t you agree? I mean fifty years from now nobody will think anything about these things.” While we are still far from being a global society that universally disregards race in matters of the heart, I think we can be encouraged that many have come a long way. Wouk also anticipated a modern tragedy. Speaking of the then current threat the Russians and the Chinese were thought to pose to the United States, a character speaks of America’s blindness to its vulnerability: “Instead of bomb shelters we construct gigantic frail glass buildings all over Manhattan at Ground Zero, a thousand feet high, open to the sky…”

Finally, Wouk offer us a glimpse of what race relations might be like at their best. Norman Paperman visits some of the old African-Caribbean families of Amerigo and feels accepted in a way he has not yet felt by any other population on the island, white or black. There was: “a friendliness tinged with reserve, but free of subservience, or arrogance, or hostility. They made him feel, most of them, that great warmth was there, waiting and wanting to break through, but held back for age-old reasons…They were not supercilious, and they were all sober—though they were drinking—and they gave him no unease at being either Jewish or white.”

For those interested in a novel that combines farce with sometimes-poignant observations about race, age, class and culture, Don’t Stop the Carnival is an engaging read.
Posted by juna at 5:57 PM