Travellers to beautiful Virgin Gorda, the third largest island in the group that makes up the British Virgin Islands—and a favorite destination for sailors, divers and snorkelers, may not have a visit to a bookstore or a library at the top of their sightseeing list. But should you find yourself in this part of the world, after playing in the beautiful turquoise water, soaking up the warm sun, and hiking to the peak of the island, relaxing with a good book may be just want you want to do.


Part of the charm of Virgin Gorda is its size and the friendliness and courtesy of the people one meets there. A greeting (good morning, or good afternoon, etc.) is given—and expected--before business is conducted and a tourist’s errant suitcase is not only returned when left behind at the ferry dock, but brought to her apartment door; a proffered tip is refused.

The first person I asked about libraries and bookstores, Casey McNutt of Dive BVI (highly recommended by Mr. and Miss. Stacked-NYC for snorkeling and diving expeditions), told me that she and many of her friends use the make-shift library of books that line the shelves of the Mad Dog restaurant. In this informal arrangement patrons can drop off a book or contribute to the collection whenever they're so inclined. The honor system prevails.  Mad Dog is operated by ex-New Yorker Inge Judd and Rose Giacinto* (who also owns the Bath and Turtle, a pub located in the yacht harbor and Chez Bamboo, a nearby restaurant that features more sophisticated fare and live music.)

Mad Dog is situated at the southern end of the island, not far from the paths that descend to one of the island’s famous beaches, the Baths, where you can swim and play among giant boulders. Make your way through the cave that they form  to the next beach over, Devil’s Bay.

During our visit to Mad Dog we ate simple but delicious sandwiches, shared some pina coladas, and enjoyed chatting with both Inge and Rose, whose friendliness and enthusiasm for life in Virgin Gorda is infectious. I also had the chance to look over the selections on the restaurant bookshelves most of which offered traditional vacation fare, but I did spot a copy of John Irving’s A Son of the Circus, which, like so much of his work, unsettled and fascinated me when I read it some years ago. *   Ms. Giacinto appears in the cookbook Morgan Freeman and Friends authored by Wndy Wilkinson and Donna Lee., with an intro by the actor. Mr. Freeman's proceeds from the sale of the book are donated to the Grenada Relief Fund.

I also found plenty of books in the apartment we had rented, left behind by the owners or other travellers. Interestingly, there seemed to be a dog theme at work here. The blurb on one jacket cover described the author as “A dog who writes his memoirs,” another featured a “dog with a devastating secret”, and a third, a dog who helps a wounded marine recover!

I was to learn later that the attractive complex where we were staying had an interesting history for library lovers. Back in the 1980s, the Olde Yard Inn, an 11-room hotel, run by a Canadian expatriate couple, had stood on this site. According to an article on Virgin Gorda written by Ralph Blumenthal for the New York Times in 1983,  Joseph and Ellen Devine were book lovers who had built:

“[a] twin octagonal redwood and mahogany library to house their collection of rare books. At the least encouragement, Mrs. Devine will guide guests through such esoteric volumes as ‘Pictures of New York on Blue Staffordshire Pottery’ published in 1899 on silk pages.”

One can only imagine the care that must have gone into protecting the books from the heat, humidity and salty breezes that blow night and day on the island. As far as I can tell, the library building was demolished, along with the rest of the hotel in 2004, but I’m hoping to learn more and would love to find out the fate of their collection and to find a photo of the library.  Any Virgin Gorda lovers out there with some older vacation snapshots?

But while I was a visitor myself, I wondered where else books could be found and what resources full-time residents and students on the island have. Happily, I was directed to the Virgin Gorda Community Library. To find it, you have to drive south, down Crabbe Hill Road, which runs roughly parallel to the main road that leads to the marina, the ferry, restaurants and shops frequented by tourists.  Watch carefully on your left for a clinic, the library will be on your right with only a modest sign to guide you. 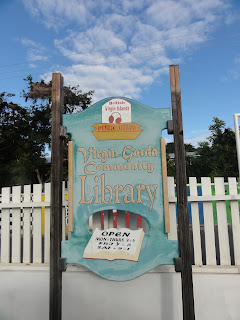 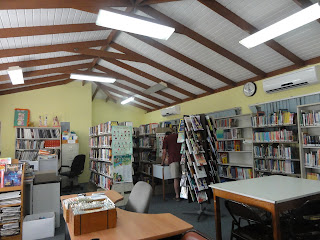 The week I was in Virgin Gorda the library was closed for Christmas and Boxing Day, but I was fortunate to find it open on the last day of our stay and to have the opportunity to speak with head librarian Tahryn Baptiste. The day we visited, Ms. Baptiste was working alone, but graciously made herself available to describe the library, telling us that it is primarily used by young people.

Along with the focus on providing local children with good books (clearly a mission of Ms. Baptiste's), the library houses an interesting selection of books about the Caribbean, including volumes about the problematic relationship bewteen the West Indies and Christopher Columbus and a volume on Jewish Pirates of the Caribbean!  (Those with a special interest in books on the Caribbean can find more at Caribbean studies unit at the branch in Road Town, Tortola.) 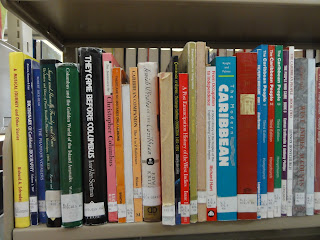 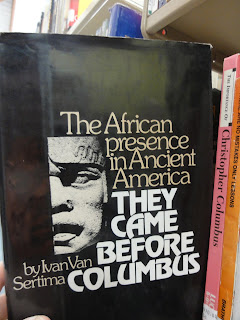 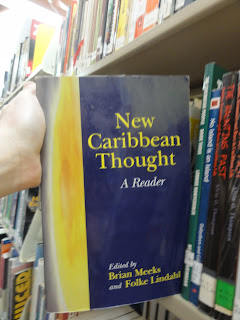 Spanish language materials are available as are classics of English literature and the ubiquitous Harry Potter novels. Presently, the card catalog is not computerized. I have to confess a fondness for this system that I remember from my Chicago childhood, with the stamping and insertion of cards in their little pockets rendering the library transaction more personal. 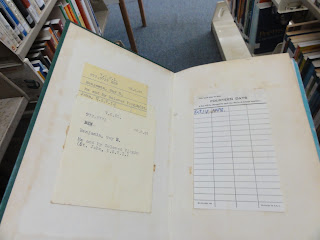 Before heading back to New York City, I had hoped to spend some time at the Enid M. Baa Library in Charlotte Amalie, St. Thomas (the capital of the U.S. Virgin Islands). In advance of my trip I had learned a bit about the library, including the fact that

“In 1943, the collection consisted of 20,000 volumes and the latest media was a Victrola for records and a silent 16 mm projector. The ‘charge desk’, locally made in 1935, was dedicated to Edna St. Vncent Millay, then in St. Thomas, to whom the first book was charged. That desk is still in use today.”

Unfortunately, the library was closed owing to a shortage of fresh water that was affecting many businesses and residences on St. Thomas that week. But I did get the chance to admire the lovely yellow building with its green shutters and to glimpse into the building’s courtyard. Sitting regally on the corner of Dronningens Gade and Bjerge Gade (the street names reflect the island's history as a Danish colony) in a business district where aggressive shopkeepers or their employees attempt to lure you in with promises of bargain jewelry, the building appeal as a quiet and dignified oasis.  More  on the Virgin Islands Public Library System, it’s Carribean collection, and branch libraries, can be found here. 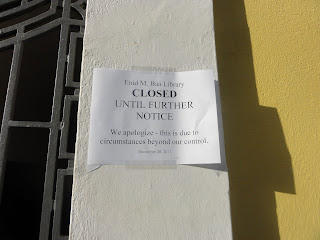 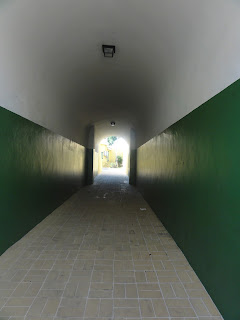 If, like me, you’ve read very little literature by West Indian-born authors, you may want to explore these links*:
Edwige Danticat
Jamaica Kincaid
Derek Walcott
The University of the Virgin Islands (in St. Thomas) also publishes, The Caribbean Writer, an annual anthology showcasing the work of established and emerging Caribbean writers.

* Clearly just a tiny sampling. If you have a recommendation for this list, please leave a comment or email me at junast20@gmail.com!
Posted by juna at 12:46 PM