Every Day is Mother’s Day

When I was still a relatively new parent, a friend aptly described motherhood as “relentless.” In her funny, sad and ultimately hopeful feature film, Towheads, video artist Shannon Plumb captures that feeling perfectly.

Shown as part of the 2013 New Directors/New Films festival presented jointly by the Film Society of Lincoln Center and the Museum of Modern Art, Towheads explores the difficulty every woman who becomes a mother faces: how to maintain your sense of self and your work (be it art or any other passion) while also doing a job that requires more self-sacrifice than virtually any other role. 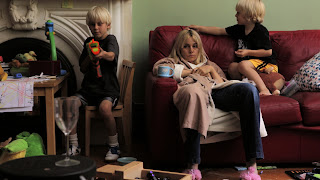 Plumb, who has more than 200 short films to her credit, stars as Penny, a mother of two sweet and lively blonde boys, played by her sons, Walker and Cody.  Real-life husband Derek Cianfrance, plays the pre-occupied and often-absent husband who is hard at work directing a play. Penny, we’re given to understand has agreed to the role of stay-at-home mom.

But this is no vanity project and the filmmaker’s message is anything but self-pitying. We first see Penny sprawled on the couch of the living room of her Brooklyn brownstone apartment, waiting until it's time for afternoon pick-up at her sons’ school. As she struggles down a bleak stretch of sidewalk, toys falling from the stroller, we get the sense that she is barely holding it together.  When she finally makes it to school, a teacher tells her the four-year-old is ready to give up the stroller.

The pretty downstairs neighbor who greets them on their return home, fresh in her make-up and dress, who playfully asks the boys to “wish her luck” on the audition she has scheduled later in the day, is just one of a series of indignities Penny suffers. Moments later the stroller is junked in the garbage.

The first half of Towheads, replete with food fights, awkward fashion choices, Penny’s early experiments with finding a different identity is just plain funny. The second half is darker.  After a mini-meltdown, Penny lets the house go on a massive scale—think dirty dishes piled high in the sink, clothes strewn around the room, objects piling up and overflowing on the mantelpiece. What mother hasn’t had that impulse?

Ultimately, it’s art that saves Penny as she takes on a variety of roles outside the house—among them, a man on the street, a pole dancer, and Santa Claus. She then returns to her studio at home to film herself in different personas. As Penny withdraws emotionally and physically from her “mom” role, her husband steps in, admonishing her to “live in the real world”.  But Penny needs time before she is able to let her kids back in again and come up with a new way to integrate family life and art.

Plumb is a wonderful physical comedienne. With her dark-rimmed eyes, she recalls Buster Keaton or Charlie Chaplin—particularly when she pastes on a mustache, but also Lucille Ball. Her moment as a PG-13-rated stripper is particularly memorable.

In a discussion after the Lincoln Center screening, Plumb described motherhood as “a hero’s quest”, telling the audience, “when you become a mom, you give your self up, become this other thing, a different person.”

I suspect that Plumb would be one of the last people to suggest that motherhood is the best or right choice for every woman. Towheads simply offers a humorous, refreshing and compassionate look at those who find themselves on the journey.

Mother’s Day is still more than a month away, but if Shannon Plumb’s new film, Towheads, gets the distribution it deserves, I can’t think of a better gift for any mother or mother-to-be than tickets to a screening.

Note: Film buffs can find a full list of titles shown at the New Directors/New Films festival for the last 42 years at this link:  http://newdirectors.org/blog/new-directors-new-films-ndnf-lineups-archive