The weather was anything but sunny today in Central Park, but this event brought out about 100 celebrants. 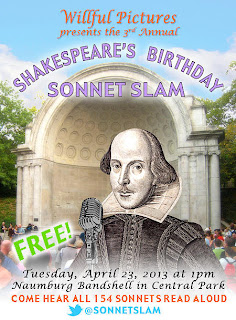 Bundled against the unseasonable cold in hats and gloves, and even a few down coats, people ranging in age from teenagers to those in their 70s or 80s read the sonnets in numerical order.   Many of the readings were beautifully done, thoughtful, expressive, and dramatic. I think there were more than a few actors in the group of volunteer readers. 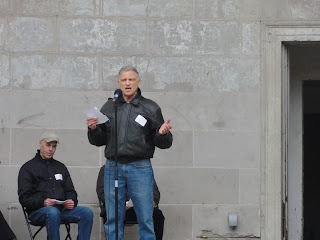 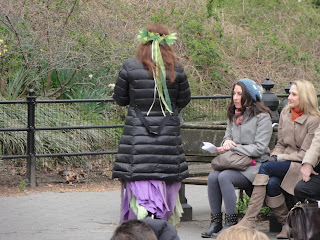 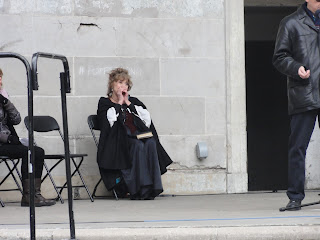 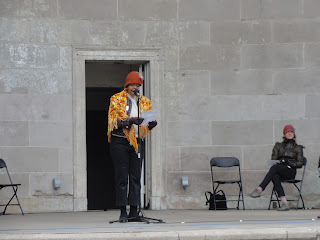 My mistress’ eyes are nothing like the sun;
Coral is far more red than her lips ’red;
If snow be white, why then her breasts are dun;
If hairs be wires, black wires grow upon her head..
I have seen roses damasked, red and white,
But no such roses see I in her cheeks,
And in some perfumes is there more delight
Than in the breath that from my mistress reeks.
I love to hear her speak, yet well I know
That music hath a far more pleasing sound.
I grant I never saw a goddess go;
My mistress when she walks treads on the ground.
And yet, by heaven, I think my love as rare
As any she belied with false compare.

And here is Alan Rickman’s seductive reading of the same.

While looking at this poem again I thought about what a good title Nothing Like the Sun might be for a piece of fiction or other work of art. Turns out not only did Sting record an album with this title, but Anthony Burgess gave this name to his novel about Shakespeare. Per Wikipedia:

Nothing Like the Sun is a fictional recreation of Shakespeare's love-life and an examination of the supposedly partly syphilitic sources of the bard's imaginative vision. The novel, which drew on Edgar I. Fripp's 1938 biography Shakespeare, Man and Artist, won critical acclaim and placed Burgess among the first rank novelists of his generation.